With the passing of the Canadian War Exchange Act on 6 December 1940, many ‘non-essential’ goods were banned from being imported into Canada. American comic books were declared non-essential and banned from import, which created new Canadian comic book publishers featuring Canadian heroes. The Canadian comics lacked color and were called Canadian “whites” as only the front and back covers were printed in color. Over twenty million would be printed by 1945, and while all retained a theme based on patriotic Canadian war attitudes, very few were based on true Canadian war heroes in WWII.

When the United States of America entered WWII on 8 December 1941, many new “True War” comic magazines were created publishing the heroes from around the world. The following RCAF hero comic appeared in True Aviation, Picture Stories No. 6, dated December 1943, “Canadian Bush Pilot.” Most of these American Aviation comics were never sold or read in Canada until the internet came along. 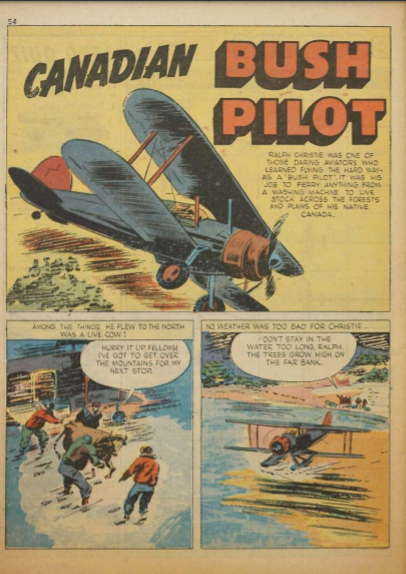 Text version without images. Images will be inserted later.

With the passing of the Canadian War Exchange Act on 6 December 1940, many ‘non-essential’ goods were banned from being imported into Canada. American comic books were declared non-essential and banned from import, which created new Canadian comic book publishers featuring Canadian heroes. The Canadian comics lacked color and were called Canadian “whites” as only the front and back covers were printed in color. Over twenty million would be printed by 1945, and while all retained a theme based on patriotic Canadian war attitudes, very few were based on true Canadian war heroes in WWII.

When the United States of America entered WWII on 8 December 1941, many new “True War” comic magazines were created publishing the heroes from around the world. The following RCAF hero comic appeared in True Aviation, Picture Stories No. 6, dated December 1943, “Canadian Bush Pilot.” Most of these American Aviation comics were never sold or read in Canada until the internet came along.

Ralph MacLaren Christie was born at L’Original, Ontario, on 15 February 1919, located 55 miles [88 k/m] east of Ottawa, Canada. His birth town was French named meaning “Moose Point”, a location on the Ottawa River, which Canadian Moose used for crossing back and forth into Quebec. In his youth, the family moved to North Bay, Ontario, where he was educated and graduated from High School. His first job was an employee at the Royal Bank of Canada in North Bay, and his spare time and money were taken up by learning to fly. Ralph soon received his commercial flying licence and obtained a bush pilot job with Northern Flying Service based in Ottawa, where after eighteen months flying he had over 1,300 hours in his log book. In 1935, more freight was being moved by air in Canada than in all the rest of the world combined. Bush flying greatly expanded during the development of iron ore reserves in Northern Ontario and Quebec. Ralph was one of the gallant new bush pilots who carried men, mining machinery, food, and even live cows into isolated mining camps, exposed at a young age to the lure of his adventurous vocation. He flew on the water in summer months and on the ice in winter with no instruments to guide him over the many mining camps in Ontario, Quebec, and Manitoba. This Canadian bush flying by the seat of his pants would save his life during combat operations over Holland in 1942.

During his F.I. course he was promoted to Flight Lieutenant and moved on to No. 5 S.F.T.S. at Brampton, Ontario, 19 January 1941. When he graduated as a fully qualified Flying Instructor on 15 April 1941, he had flown over 100 hrs. instructing, and his total flying time was 145 hrs. single-engine solo, 43 hrs. single-engine dual, 140 hrs. twin-engine solo, and 18 hrs. twin-engine dual. Arrived No. 1 “Y” Depot Halifax, Nova Scotia, 12 February 1942, sailed for England, arriving five days later. Posted to No. 1 [Coastal] Operational Training Unit at RAF Silloth, ten miles S-W of Kirkbride, Cumbria, England. Below is free domain air-photo of RAF Silloth taken in 1943, looking North-West to the Irish Sea. RAF Silloth was #82 on the Airfield map in WWII. 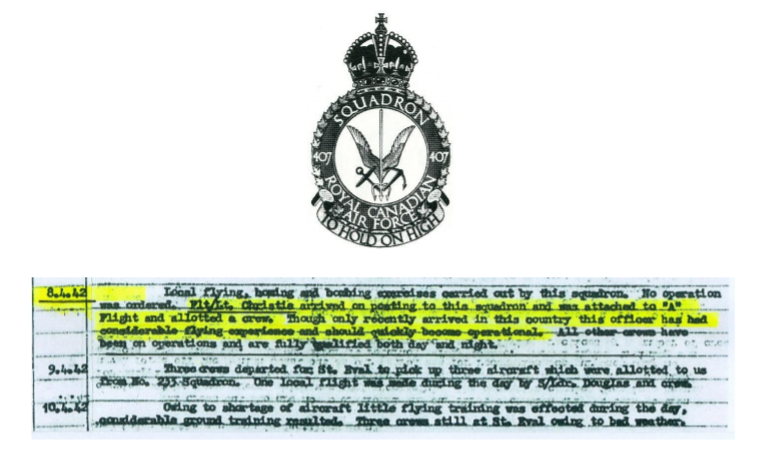 The flying qualifications of F/Lt. Christie were included in the No. 407 Squadron Daily Diary. F/L Christie was promoted to Squadron Leader on orders dated 15 May 1942, the same date he would first lead twelve RCAF Demon Hudson aircraft on a German shipping attack over the Dutch Coast. Eight RAF Hudson aircraft from No. 320 [Dutch] squadron would also join the Canadian coastal raid over their Nazi controlled homeland.

RCAF photo of No. 407 [Demon] Squadron in flight, from Chris Charland. The twelve Hudson Mk. V aircraft of No. 407 Squadron and the eight from No. 320 [Dutch] Squadron took off at 20:20 hrs, in two formations, the first ten Demons led by F/Lt. Christie. The second formation of two Demon aircraft and eight Dutch Hudson bombers were led by P/O Kay in Hudson “O” serial AM906. Hudson “V” serial AM701 piloted by Sgt. Santy had one engine pack it in and his crew had to abort and return to base. RCAF photo Hudson RR-G from Chris Charland.

F/Lt. Christie explains his trip back to home base. “The experience I had in Northern Ontario really paid big dividends that night. I don’t know how I would have gotten that aircraft back if it hadn’t been for all the things I learned the hard way bush flying up north.”  When he joined the RCAF Christie had 1,300 hours of flying ‘by the seat of his pants’ over lakes, forest, muskegs, and finding the tangled mining camps in northern Ontario, Quebec, and Manitoba.

“The wings, fuselage and tail were all peppered by flak and some of the controls were shot away. My navigator was wounded and my instruments were useless but somehow we made it to the coast and sighted an RAF Base [Docking] where I came in and did a belly landing at terrific speed and we seemed to skid along the ground forever.” 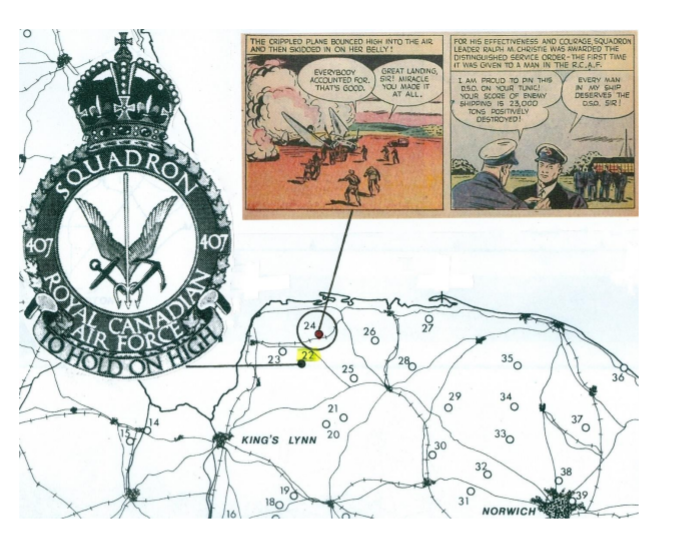 At 00:39 hrs. 16 May 1942, F/Lt. Ralph MacLaren Christie C1278 crash landed his heavily damaged Lockheed Hudson Mk. V, serial AM626, bomber at RAF Station Docking, [#24 on map] just a few miles from his home base located at Bircham Newton #22 on map.  A second Hudson “O” serial AM906 had a wounded pilot P/O Kay, and a dead observer, P/O Kippen. They had followed the flight of Ralph Christie across the North Sea and also crash landed at RAF Docking. Four Hudson crews returned safely to No. 407 Squadron base at Bircham Newton, one aborted the operation, four aircraft are missing and one crash landed at RAF Coningsby killing the five aircrew.

Twelve Lockheed Hudson Mk. V RCAF bombers attacked the German convoy and only four intact aircraft returned to base.  Explained in the words of F/Lt. Christie: “We fly at zero feet – by that I mean just over the wave tops. The reason for this is it makes it more difficult for the ship we are attacking, to bring its guns to bear on us. It also offers protection to some degree against enemy German fighters, as they don’t like to dive so close to the sea in order to attack our aircraft successfully. This particular night it was not a long flight until we were in enemy waters. Then everybody was on qui trying to spot the enemy convoy of ships. It was dusk and the light was fading when we went in to attack just off the Dutch coastline. It was a very important convoy well protected by armed ships and destroyers. All hell broke loose as we swept in to deliver our attack. There was a veritable screen of fire coming up from the German ships escorting the convoy. I saw one of our Hudson aircraft hit fully and then crash into the sea. The aircraft in front of me was hit, the aircraft sort of shuddered, picked up speed and got through the fire. I learned later the first burst of flak had peppered up through the floor of the bomber, wounding pilot Frank Kay from Montreal, Quebec. He continued on and managed to drop his bombs almost at deck level. There was no doubt he scored a direct hit. This all happened in seconds, and by this time, I was on my way into the large ship I had selected for my attack. I don’t mind admitting I was scared and scared plenty, but we didn’t have much time to think of what was going to happen to us. I gave the engines full throttle, pulled up to mast height and when we were directly over the deck, I let my bombs go. We were credited with direct hits and destruction of the largest ship in the German convoy.”

In 1943, S/L Christie was honoured in a Men of Valor RCAF poster by Hubert Rogers. Original painting stored in Canadian War Museum collection in Ottawa.

S/L Christie had completed 208 hrs, flying Lockheed Hudson bombers on low level anti-shipping and offensive patrols. Posted to No. 4 O.T.U. at RAF Station Stranraer on 10 June 1942, where he completed seven weeks of Flying Boat training. Posted to RCAF No. 423 [General Reconnaissance] Squadron on 18 August 1942, where he flew 254 hrs. in Short Sunderland Mk. III flying boats until posted to RCAF Overseas Headquarters on 2 November 1942. 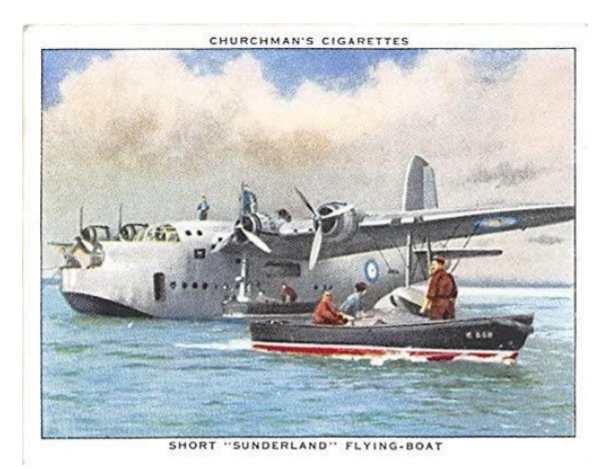 Follow Preserving the Past II on WordPress.com
Join 34 other followers